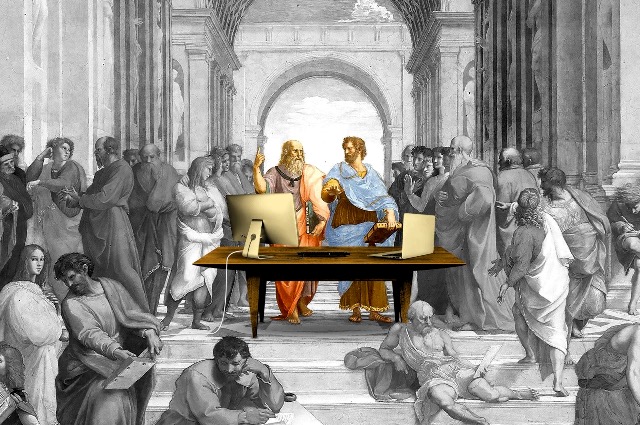 Bachelor’s degree in Political Science, International Studies, obtained at the Faculty of Political Science "Cesare Alfieri" with a thesis entitled: "The vanguard of Islamism. History of the Muslim Brotherhood movement from 1928 to 2011". During her master’s studies she followed an online training course on cybersecurity issues organized by IBM Italia. She worked as an intern at the Center for Cyber Security and International Relations Studies (CCSIRS), participating in research projects related to cyber capacity building. Her main areas of interest in cybersecurity are: autonomous vehicles (civil and military), cyberspace governance and cyberwarfare (with main focus on the Middle East).

He is currently enrolled in a master’s degree in International Relations at the University of Florence. Coming from a background of humanities and music, he holds a diploma in Violin from the “L. Cherubini” conservatory of Florence. He has simultaneously studied historiography, gaining an honours certificate at the Norman Academy. He is part of the History and Musicology Department’s staff at the Thomas More University (UPTM - Rome). Upon invitation by the Dean, Prof. Giulio Tarro, he has also become part of the Istituto Superiore di Ricerca (lit. “Higher research center”) of the same name (ANR/MIUR). He takes active part in continuing education courses and conferences organised by the same institutions at the Italian Armed Forces Officers’ Club in Rome. He is interested in military technology, conventional arms and cyber crime.

He holds a master’s degree in European and International Studies from the University of Trento and Sant’Anna School of Advanced Studies. His thesis was titled “Jus ad Bellum and the Challenge of Cyber Operations: Old Rules for New Weapons?”. Freelance journalist, he has matured a few experiences in the institutional communications sector throughout the years: particularly, in 2016, he was Communications Advisor at the Press Office of the Ministry of Foreign Affairs and International Cooperation. He is particularly interested in cyber security and international law, and the complex relations between the two.

He holds a degree in International Relations from the “Cesare Alfieri” School of Political Sciences. He won the 2015 edition of Premio Galli (lit. “Galli Prize”). He is a member of the Student Research Committee in International Relations Theory at IAPSS. His research focuses on security studies and, particularly, on human-machine interaction on the battlefield, up to their integration in the cybernetic dimension and the nature of future warriors, using geek instruments to analyse complex non-linear dynamics of war. He is part of the team project for the OSCE research project, in collaboration with the University of Florence, “Enhancing the Implementation of OSCE Confidence Building Measures in order to Reduce the Risks of Conflict Stemming from the Use of ICTs”.

She graduated in Political Sciences at the LUISS University of Rome, with a thesis on islamic fundamentalisms in Saudi Arabia. She is currently enrolled in a master’s degree in International Security Studies, jointly offered by the Sant’Anna School of Advanced Studies of Pisa and the University of Trento. She is currently interning at the the OBC Transeuropa. She is interested in cyber security and cyber space governance. She is responsible for the CCSIRS’s communications and social networks.

She is interning at the Department of Cybersecurity at the Ministry of Foreign Affairs of the Czech Republic. Previously, she has interned at the Permanent Mission of the Czech Republic to the United Nations in New York. She holds a master’s degree in Public International Law from Leiden University and a bachelor’s degree in European and International Law from the Sorbonne Law School. She has attended the International Cyber Security Summer School and various courses on cyber warfare, cybercrime and cyber defence, co-organized by Europol and the NATO Communication and Information Agency. She is particularly interested in cyber diplomacy, cyber warfare in the Middle East and space security.

Camilla Luperto holds a three-year degree in Strategy of Communication under Political science at the University of Florence, Cesare Alfieri.She is currently a Master student in Public and Politic Communication Strategies at the same University. Consistently with her interest in cyber space and, more specifically, with this new domain’s security issues, she is currently writing her thesis on the Israeli cyber security. Along with that, she collaborates as research assistant and social media manager at the Centre for Cyber Security and International Relations Studies (CCSIRS) at the University of Florence. In particular, her research interests include diplomatic efforts and initiatives in the cyber domain.

She is a Political Sciences student at the Sant’Anna School of Advanced Studies of Pisa, after obtaining a degree with honors in Languages, she is interested in critical digital infrastructures, cybersecurity, cryptography, international security and the mutual influences between them and within international relations. She's also interesed about the problem of adopting policies in accordance with the guidelines of cybersecurity experts. Following a series of study experiences, she is currently focusing on the People's Republic of China and the developments within the maritime field.

He holds a degree in Political Sciences, International Studies from the Political Sciences Faculty at the “Cesare Alfieri” School in Florence. During his studies he attended a course on UN Negotiation Processes and Techniques at Consules, and participated in the Consules Model United Nations” (Rome) and “National Model United Nations” (New York) simulations. In 2018 he got the diploma in Geopolitics and Global Security” at ISPI, and in 2019 he attended the course “Intelligence and National Security” at the University of Florence. Actually, he is enrolled in a master’s degree in International Relations and European Studies at the “Cesare Alfieri” faculty and manages the website and the social media of the Center.

He holds a Bachelor's Degree in International Studies at the “Cesare Alfieri” Political Sciences faculty, University of Florence, obtained with a thesis on Russian election interference in the 2016 US Presidential election. During his academic career, he attended the 2019 National Model United Nations (NMUN) in Washington, DC. Thanks to his diploma in Information Technology, he is an associate at the Center for Cybersecurity and International Relations Studies (CCSIRS), where he is responsible for graphics, layouts and the official website. He is particularly interested in US politics and cybersecurity issues.

Graduated in International Development and Cooperation Sciences from the University of Turin with a thesis on deterrence in cyberspace. After a year of attending the master's degree course in Strategic Sciences at the Interdepartmental University School of Strategic Sciences (SUISS) as a civilian, she obtained a Master's in International Security and Terrorism at the University of Birmingham. Over the years she has always cultivated a passion for international security, obtaining a diploma in "Geopolitics and Global Security" at the Institute of International Political Studies (ISPI) in 2017. Outside the Center, she is the local secretary of Youth Atlantic Treaty Association. She is mainly interested in cyber warfare with a focus on physical infrastructure, cybercrime and PsyOp.

After a study experience at the Center for International Relations of the University of Warsaw and an internship in Bruxelles, where he worked on communication and advocacy for Human Rights Watch, he graduated cum laude at the “Cesare Alfieri” School of Florence with a thesis on deterrence in cyberspace. He has attended the master’s course in Diplomatic Studies at “SIOI - UNA Italy”, in Rome. He currently works as a cybersecurity analyst at Deloitte. He is one of the CCSIRS’s founders, and has authored a paper for the Center on cyber war as a future war instrument, considering the Russian-Georgian case. He takes care of external relations for the CCSIRS.

Bruna holds a master's degree in International Strategic Studies from the Federal University of Rio Grande do Sul (UFRGS) and a bachelor degree in International Relations from the Federal University of Santa Maria (UFSM), both Brazilian institutions. Currently, she is a PhD candidate at UFRGS, developing her thesis on states' perspectives on cyber power. Besides her engagement in the Center for Cyber Security and International Relations Studies (CCSIRS), she is a researcher of the Defense Studies and International Analysis Group (GEDAI/UNIFA/CNPq) working in the CyberIR and Cyber Defense research line and a research fellow at the Alexander von Humboldt Institute for Internet and Society (HIIG) in the research program II: Data, Actors, and Infrastructures.